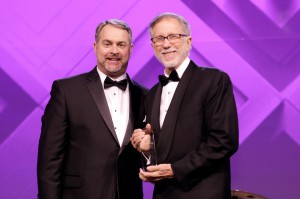 It took nearly five decades of hard work, a lifetime of achieving firsts and only a moment in time for the honour and hour of recognition when Larry Roberts was called to the stage to accept the Leading Real Estate Companies of The World prestigious Leadership Award, one of the highest international awards ever presented to a Bahamian real estate professional. Roberts received the Leading Real Estate Companies of the World (LeadingRE) Leadership Award at the organization’s annual conference at the Las Vegas Wynn earlier this month. Roberts, who spent almost 50 years at the helm of Bahamas Realty until he stepped down as President and CEO in October, becoming a consultant, was one of only two to receive the Leadership Award before an audience of 3,000 from 24 countries. He was also one of only four real estate professionals from outside the United States to be honoured in any category by his peers. “The Leadership Award, celebrating brokers whose leadership skills and achievements have drawn the attention and admiration of others, was presented to two deserving recipients this year, Larry Roberts, Bahamas Realty, Nassau, Bahamas, and Lennox Scott, John L. Scott Real Estate, Seattle, Washington,” said LeadingRE President Pam O’Connor, explaining that the awards “celebrated the achievements of those members who have performed at the very highest levels.”
Bahamas Realty CEO Donnie Martinborough said the company was “incredibly proud of Larry and could not find a more deserving candidate for such an honour.” He called Roberts’ achievements singular and impressive. “Long before the real estate industry in The Bahamas was regulated Larry saw the need for legislation that would regulate the industry, provide instruction for new entries, certify and licence those individuals and maintain standards of ethics as well as being a source for updates and a voice. He and his colleagues in the industry prevailed and in 1995 the Government of The Bahamas enacted the Real Estate Salesman & Licensing Act. Over the years, he would serve two separate terms as President of The Bahamas Rael Estate Association. He was equally committed to community service and served as President of the Rotary Club of South East Nassau. Rotary is the largest civic organization in The Bahamas. Martinborough recalled that Roberts was the first to computerize operations and to appreciate where the internet would take the industry, launching the industry’s first website in 1997.
“Larry always seemed to have an uncanny ability to see the future of business ahead of many of his peers, but gaining their support was not always a walk in the park. When Larry wanted The Bahamas to employ Multiple Listing Service (MLS), knowing it would help to even the playing field and make it easier for buyers and sellers, he met surprising resistance. Undaunted, he campaigned long and hard. And once again, Larry Roberts succeeded on behalf of the profession.” Real estate firms in The Bahamas adopted MLS in 2008. Bahamas Realty President Robin Brownrigg also spoke of the personal side of the industry pro. “Beyond all he did for the profession as a whole and beyond the gentlemanly way he conducted himself regardless of the size of the transaction, Larry Roberts was a one-on-one friend and advisor whose door was always open,” said Brownrigg, who has been his business partner for most of their working lives. “New recruits bombarded him with questions; senior agents and brokers sought his advice and he never hesitated to give of his time, knowledge and talent, even when serving on various civic boards including Safe Bahamas, The Princess Margaret Hospital Foundation, Nassau Tourism & Development Board and Downtown Nassau Partnership. He set an example for all around him.”

Bahamas Realty Ltd., which has been in operation since 1949, is an affiliate of the invitation-only network, Leading Real Estate Companies of the World® (LeadingRE), and Luxury Portfolio International®, the exclusive luxury marketing program of LeadingRE. It is also a member of NAI Global, the world’s largest network of independent commercial real estate brokerage firms.