Login and narrow your search. If you have fewer than 200 results, you can save your search.

View current listings on Grand Bahama. Contact Bahamas Realty for more information about a specific property. Register with us to save your favorite listings and get email notifications when similar properties become available. You may also be interested in viewing listings on other featured islands.

There's truly something for everyone.

You can look forward to a memorable mix of historic charm, modern attractions, and ecological wonders on your visit to Grand Bahama Island. The warm welcome you'll receive is just extra insurance that you'll return again and again. Being so close to the ocean, you'll have no trouble discovering new and exciting activities to do on Grand Bahama Island. From annual regattas to snorkeling tours and fishing expeditions, this island has many reasons to get your feet wet. Click to show/hide more information about Grand Bahama Island.

Not in the mood for swimming or snorkeling? Grand Bahama Island offers a variety of fun, relaxing, and even educational activities. You can play golf on a world class course, take a Jeep safari tour around the island, go horseback riding on the beach or get in touch with nature at Garden of the Groves. On Grand Bahama Island, boredom is not an option.

Where Nassau is a blend of the old and new, Freeport/Lucaya is a modernistic planned city and is situated on the Island of Grand Bahama. Grand Bahama Island is the second most popular tourist destination in the Bahamas. Here you will find long stretches of deserted clean-white beaches, inviting hotels, one major casino, night-time entertainment, and world-class scuba diving facilities and land and sea sports.

Freeport is the resort center of the Island where lots of action can be found. On the eastern and western ends of the Island are serene and quaint settings and finding a hide-away spot is relatively easy. Shopping is also a feature as one can stroll through Port Lucaya Marketplace and discover duty-free treasures from around the world.

Like New Providence, the larger Grand Bahama boasts (more) miles of pearly white beaches and luxurious hotels. Unlike Nassau, the less populated outskirts of Grand Bahama supply more serene and tranquil surroundings (read deserted beaches) popular amongst those who desire private hideaway spots reminiscent of the Family Islands. According to a census taken in 1990 stated that there are 40,898 persons living in Grand Bahama, of which 12% were non-Bahamians, and 88% were Bahamian.

For those into nature, Grand Bahama is also home to one of the oldest underwater cave systems in the world, situated at the Lucayan National Park. Whether you're looking for modern luxury or want to get away from civilization, Grand Bahama offers the best of both worlds.

The Spanish gave the island the name "Gran Bajamar" -- or great shallows.

Since the American Civil War, the economy of Grand Bahama has been tied to the United States of America -- during the Civil War Grand Bahama was a source of smuggled goods needed by the South; during prohibition it was alcohol; today, Bahamians import the bulk of their goods through the United States paid for by the money derived primarily from tourism (our "export").

Modern Grand Bahama Island is driven primarily by the vision of an American businessman Wallace Groves. Where others saw a mass of pine trees, Groves saw an international tourist destination for Americans, much like Cuba.

During the early 1950s American investor, Wallace Groves, and British financier, Sir Charles Hayward pioneered development on Grand Bahama Island. Their vision for development led to negotiations with the Government of The Bahamas and the signing of the Hawksbill Creek Agreement. The Agreement, executed on August 4th, 1955, created the 'Port Area', and gave birth to the City of Freeport -- wherein the government granted 50,000 acres of land to The Grand Bahama Port Authority Limited (GBPA).

The agreement required the dredging of a deep-water harbor at Hawksbill Creek in the western sector of the Port Area. It also granted GBPA responsibility for the provision, management, and administration of all infrastructure, municipal and community services, and for development of 50,000 acres of crown grant land which was later extended to 138,000 acres. This, together with an additional 12,000 acres purchased by the GBPA from other parties, forms the 160,000 acre 'Port Area'.

The agreement also conveyed to the area the legacy of a "free port" with substantial tax concessions for financial, commercial, and industrial enterprises (extended until 2054). 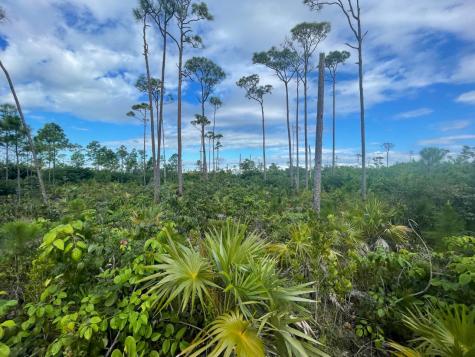 This private residential lot is located in Shannon Country Club Subdivision, Freeport, Grand Bahama. Although in a quiet neighbourhood, a newly constructed house abuts it's eastern boundary while existing homes are located on it's western side and immediately across the street in a desirable location in Shannon Country Club. One of the largest lots in the area with 18,750 square feet, the northern side of the property lies on the former golf fairway providing for a lush expansive backyard area. Shops, grocery stores, restaurants, marinas, schools and the beautiful southern sandy shoreline of Grand Bahama are in close proximity. This is an ideal lot upon which to build your dream home at a remarkably reasonable price.

Looking to build, but not sure where to start? Look no further! This incomplete structure located in the ever popular Lincoln Green Subdivision, nestled on Cadney Lane is ready for its new owners. This property allows you room to make your own personal touches and build the home of your dreams, with a layout boasting 4 bedrooms, 3 bathrooms, full kitchen, laundry room, covered patio, terrace , cabana, swimming pool and a two car garage. This home is definitely a must see. Arrange to view today! Single-family lot available for immediate purchase in Grand Bahama. All utilities and paved roads are provided to this spacious 14,197 square foot lot with low maintenance fees. Enquire for more details on this central and well-priced lot today. The island of Grand Bahama lies just 55 miles off the coast of Florida and the city of Freeport is known as the second city of The Bahamas. It is diverse with many different people and cultures and has much to offer. Grand Bahama Island combines the old and the new; the charm of historical fishing villages and ecological treasures and world-class resorts and communities. Freeport offers well planned streets and shopping districts, excellent infrastructure, an international airport, modern deep-water port and numerous hotels. 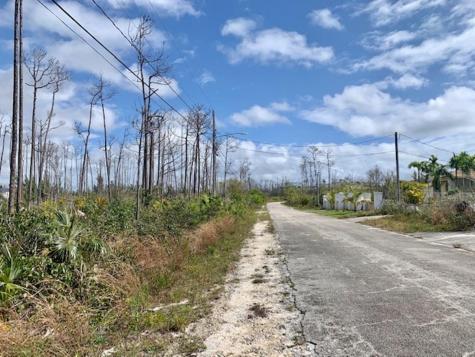 This spacious lot provides the perfect venue for your future homestead. This lovely duplex lot is located in one of the up and coming neighbourhoods of Grand Bahama just off of Churchill Drive. You can enjoy quick access to downtown Freeport, airport and Harbour via Grand Bahama Highway or head to Port Lucaya and the beaches via East Sunrise Highway. Both are moments away. Situated close to all amenities, including shopping, schools and the beaches. Make an offer!!! This is a very rare opportunity to own a large multi-family property right on the waterway in Sentinel Bay. The property has over 45 feet on the canal along with a spectacular view of the western waterway. This property lies at the corner of Cressling. Very secluded. Bring an offer! 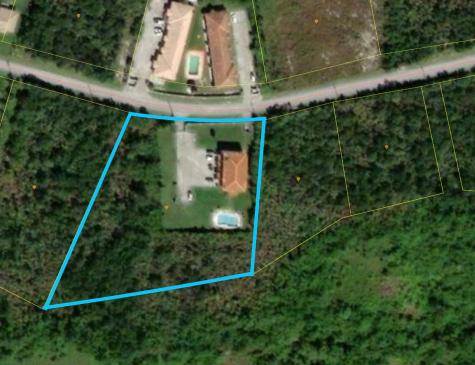 Located on 2.75 Acres of land, this land has an existing apartment building that has 4 townhome units and plenty of room for you to build more buildings. The complex is walled and gated and has its own swimming pool. The current building has the monthly rental potential of bringing $4,800 to $6000 a month if renovated and upgraded. It is located in Bahamia on what once was the Emerald Golf Course and very close proximity to the downtown area, harbour and Lucaya. Let us help you get started with your investment today! 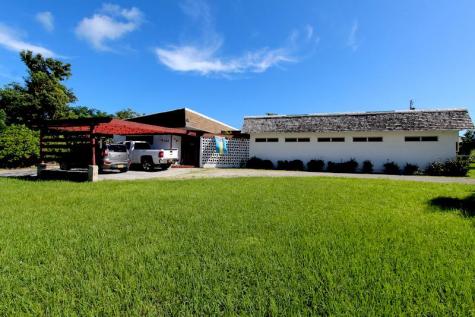 This three-bedroom, two-bathroom home has great bones and is fully furnished. Oversized lot with pool. The kitchen which overlooks the pool has been recently renovated. Located on high ground known as the "The Ridge". Call us for more information. 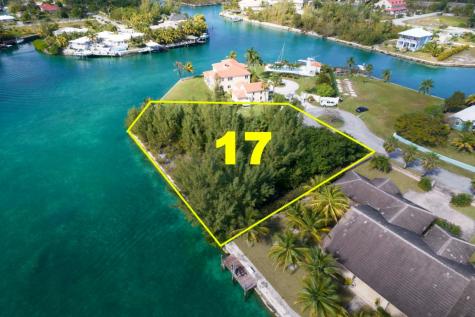 Fantastic canal lot overlooking the Fortune Bay Canal System. Perfect location for your dream home!! Boasting a little over 200 feet of water this lot has utilities and is about half an acre in size. Call for more information.

This beautiful home has it all: beautiful views, dockage, pool and gazebo, double car, electric gate, garage, guest house, generator, architectural design, allowing a lot of natural light. The property features four bedroom three and a half bath and sits in the prestigious community of Fortune Village in Fortune Bay subdivision of Grand Bahama island, offering also a wrought iron fenced canal lot next door. This property is probably the best waterfront investment currently on the market!

Enjoy this nicely renovated 2-bedroom unit in Jansel Court. Centrally located and secure. This apartment is beautifully decorated. Move in ready, sparkling pool, relaxing balcony. This apartment has fantastic income potential or your very own home away from home in the Bahamas. 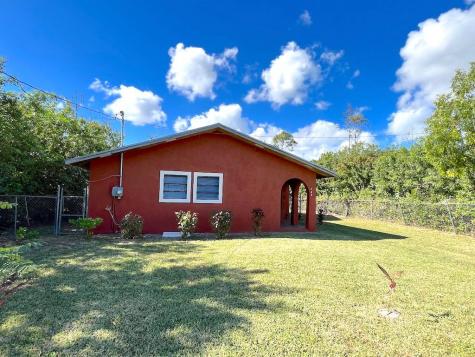 This home is located in the downtown area of Freeport in Hudson Estate. Currently the home has 2 bedroom however originally the house was 3 bedroom and can be turned back to original plans. The property is located in quiet cut de sac and is close to all amenities including the airport, churches and schools. This home has a great potential for a family home. Call to arrange a viewing.