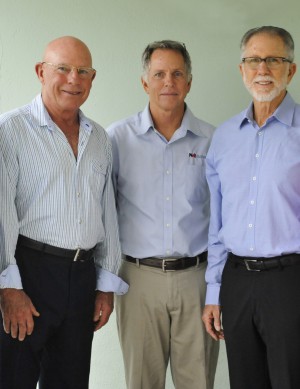 Bahamas Realty announced today that W. Larry Roberts, a two-term president of the Bahamas Real Estate Association and visionary leader who pioneered many of the firsts in the real estate industry, has stepped down as Vice President and CEO after a career that spanned nearly half a century. Mr. Roberts will remain a director and consultant with the company founded by his father in 1949.

Mr. Donald ‘Donnie’ Martinborough, who has managed the growing commercial division of the prominent firm for 30 years, has been named CEO.

The announcements were made by Bahamas Realty President Robin Brownrigg.

“No one could have served the real estate industry with more integrity and dignity than Larry Roberts,” said Mr. Brownrigg. “He was the first to recognize the power of the internet, the partner who ensured that we would be the first to have a website, the first to computerize all our office systems and listings and a strong and powerful proponent of the Multiple Listing Service which is now an essential part of how the industry functions. We are pleased that Larry will enjoy more well-deserved leisure time with his wife and soulmate Liz and very pleased that he has agreed to remain a director and active consultant.”

According to Mr. Brownrigg, the appointment of Donnie Martinborough allowed for a seamless transition and fulfilled a well-conceived succession plan.

“Bahamas Realty, having established itself as a leader in the Bahamas real-estate industry, is now at an exciting threshold as younger stars are rising to take over the leadership of the company,” said Mr. Brownrigg. “It brings me tremendous pride to announce that Donald Martinborough is now assuming leadership as CEO. He brings fierce determination, loyalty and trust, and gives us enormous confidence that our future will remain very bright. Donnie’s energized, competitive and focused spirit, coupled with his wealth of expertise in the commercial management department, have proved invaluable to the success of this business. We all wish him the very best in his new role of leadership.”

Mr. Martinborough has headed up the commercial division for three decades and today as Managing Director of NAI Bahamas Realty Commercial handles more than one million square feet of rental space.

“Donnie has continually grown the commercial side of the business while maintaining valuable personal relationships with owners, tenants, vendors and suppliers. Balancing all of that and doing it well has prepared him for performing well at the helm of this company with its spectrum of services and diverse range of residential, resort and commercial clientele.”

Martinborough, who began at Bahamas Realty immediately after high school, is an internationally recognized Sunfish sailing star, having won the Sunfish World Championship three times and holding the record for the most wins in the 20th Century in the Sunfish class in Bermuda Race Week, a record that can never be challenged.

The challenge he faces now, he says, is a demanding one.

“It has been such an honour and a pleasure to work alongside Larry Roberts all these years,” said Mr. Martinborough. “He has done such a great job managing and successfully leading this firm even while he was serving in other roles whether as president of BREA, or addressing international meetings in Rome or serving as President of the Rotary Club of Southeast Nassau or on one of the many civic boards – Safe Bahamas, Nassau Tourism & Development Board, Downtown Nassau Partnership, Princess Margaret Foundation – he was appointed to. These are mighty big shoes to fill and I am proud and humbled by the level of confidence my partners have expressed in me by appointing me the new CEO of Bahamas Realty.” Mr. Martinborough’s appointment is effective immediately.

-- Photo: Donald ‘Donnie’ Martinborough, centre, is named CEO of Bahamas Realty as W. Larry Roberts, 2nd from right, steps down as Vice President and CEO after a career that spanned nearly half a century. Roberts remains a consultant and director in the firm founded by his father in 1949. Martinborough, a partner, has grown the commercial division over 30 years with the company and is Managing Director of NAI Bahamas Realty Commercial with more than one million square feet of office and commercial space under management. (Photo by Iona Henderson) 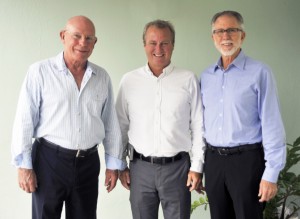 NASSAU, BAHAMAS – October 12, 2017 – Bahamas Realty Ltd., one of the largest and most respected real estate companies in The Bahamas, announced today that seasoned Sales Associate, Mark Moyle, has joined their growing family of real estate professionals.

“We are delighted to welcome Mark Moyle to Bahamas Realty,” said CEO Larry Roberts. “The improving economy and outlook for the real estate market continue to create new opportunities for our clients and Mark adds an exciting dimension of experience connections to our business.”

Mark Moyle has an impressive background in real estate as well as project management. He brings to the team a unique understanding of quality construction for residential and commercial properties, and experience working with clients in the high-end real estate market of Harbour Island.

“I’m thrilled to join the team at Bahamas Realty,” said Moyle. “They are a fantastic group known for their passion and integrity in the business, principles which are very much in line with my own.”

Transitioning to full-time real estate in 2015, Mark becomes the third generation of realtors on his mother’s side of the family. Mark has been involved in many successful purchases, transactions and developments throughout Nassau and the Family Islands.

Bahamas Realty Ltd., which has operation since 1949, is an affiliate of the invitation-only network, Leading Real Estate Companies of the World® (LeadingRE), and Luxury Portfolio International®, the exclusive luxury marketing program of Leading RE. It is also a member of NAI Global, the world’s largest network of independent commercial real estate brokerage firms.