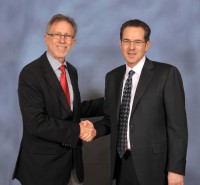 Mr. Roberts said he was "honoured, surprised and delighted to receive the NAI President's Award, particularly as we are relatively new members of this extraordinary group. NAI Global is one of the world's leading providers of commercial real estate services." NAI President Jay Olshonsky presented the President's Award to Larry Roberts for his "leadership, participation, initiative and cooperation in fostering the interests of NAI Global between members."

More than 700 North American commercial real estate leaders, plus 70 from the Latin American and Caribbean area, attended the event at which Mr. Roberts was honoured. During the recent conference, Larry Roberts and Lindsey Cancino, CFO of Bahamas Realty, also secured the next regional meeting for the organization in Nassau, in May, 2013.

NAI Global is one of the world's leading providers of commercial real estate services with a Network of 5,000 professionals and 350 offices in 55 countries. Mr Cancino explained that he and Mr. Roberts used the recent conference to "solidify the contacts in the NAI Global network particularly as it relates to the Caribbean and Latin American countries, and to strengthen contacts with China and Australia offices concerning business which could come out of Freeport." Of Mr. Roberts’ President's Award, he said "We knew he was nominated, but were a little surprised that he won, because we are rather new with NAI. Larry has been very involved in the committees he sits on. The award is for his contribution to the leadership role in Latin American and Caribbean division. “NAI President Olshonsky is very serious about us all working together."

Mr. Roberts points out that his company's mission statement sums it all up, "NAI Bahamas Realty Commercial ... Corporate Real Estate Solutions for a world that demands real world results". He adds, "When you are dealing with Bahamas Realty and NAI Bahamas, our commercial division, you are dealing with the whole NAI Global group, the top independent realtors in 55 countries with $45 Billion in transactions annually. We manage more than 300 million square feet of commercial space. But, we also know, appreciate and... can meet ...your local needs." 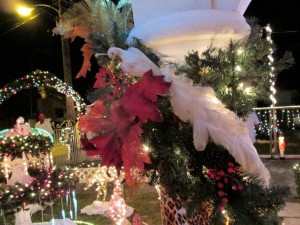 A new winner claims the top prizes in the 3rd Annual Bahamas Realty Holiday Home Showcase: “The Christmas Star,” Golden Gates 1, home of the Sonia & Malachi Adderley Family, who also won the Peoples’ Choice Award on Facebook. “ Again, the competition was so close between the two Adderley families of Golden Gates 1 and Golden Gate 2, Nassau, that judges wished they could award a tie,” according to HH Showcase Founder Sara Parker, Real Estate Broker and Executive Producer of the popular “Bahamas Realty Now” TV show, which will feature the winning properties in January. Eminent judges struggled for two days to break the tie between the two properties which light up the skies -- and children’s faces--in Golden Gates. “The homes were judged based on four criteria: Use of Lights, Creativity/Imagination, Overall Design/Theme, and Christmas Spirit. It was a difficult decision for our three judges, as every one of these homes was a showstopper,” noted Showcase Co-ordinator Iona Henderson, Marketing Co-ordinator at Bahamas Realty Limited, (BRL). “We all had a lot of fun, and you really could feel the Christmas spirit spreading. I felt like a child again!” It came down to the minute details, according BRL President and Top Appraiser Robin Brownrigg, who explained the Judges’ decision saying, “It was a good problem to have in that we had two legitimate winners! It doesn’t get better than that. It took a lot of deliberation to examine the details that make a difference, studying the hand crafted components, the hand carved Junkanoo figures and the hand crafted details of the costumes in the winning entry.” That’s how the top BRL Holiday Home Showcase prize went to “The Christmas Star” created by the Sonia & Malachi Adderley Family of Golden Gates 1, #16 Bamboo St. They won the $1,000 Gift Certificate from The Builders Mall Stores and a $500 donation to the charity of their choice from Bahamas Realty. They also won the PEOPLE’S CHOICE AWARD - $500 of BEC Bucks toward their Electricity Bill, with the winner chosen by Facebook voters. Second place went to the James and Ruth Adderley Family of, #2, Leeward Isles in Golden Gates 2, for their towering creation “Cultural Expression.” This Adderley Family won the first BRL Holiday Home Showcase in 2011 and repeated in 2012. For 2013, they added hand-cut Junkanoo dancers and Junkanoo music to their immense lighting display, featuring big reindeer and angels hand-made by the family. Second Prize is a Eureka Vacuum Cleaner from Jolly Roger and 5 Gallons of Devoe Paint from Paint Suppliers. A new entrant in Seabreeze, Sandra Bain, placed third with “Festive Spirit in Seabreeze,” an elegant creation of lights arching through the night. The prize is a $150 gift certificate for dinner at Luciano’s of Chicago. Returning Judge Stan Burnside (Artist, Cartoonist, Educator), said, “I wouldn’t miss this experience. It warms my heart to see the joy these families bring to each other and their community.” Radio Personality Eddie Carter judged for the first time this year. He said, “My family and I really enjoyed the competition. The displays were amazing. They did not make it easy. It was good to see and feel that holiday spirit right here in our beautiful Bahama Land.” Peter Knowles, age 11, served as the Hon. Kid’s Judge. He predicted the outcome early on, saying “This is a 5, 5, 5, 5, 5 !” when he saw the “Cultural Expressions House” and then, “ The Winner of the Winners!” when he viewed “The Christmas Star.” The moving trains sealed the deal for him. Andrea Brownrigg, a Director and Broker at Bahamas Realty, serves as a key member of the Holiday Home Showcase Steering Committee, which also includes Sales Associates Brian Austin and Marissa Knowles and Broker Sara Parker. Mrs. Brownrigg said “I really want to thank the participants who devoted weeks of their lives to making it brighter all over the Bahamas, the committee and, of course, the sponsors who made it possible: Bahamas Realty, The Builders Mall stores, Jolly Roger and Paint Suppliers, Lucianos of Chicago and for the Facebook Peoples Choice Award, BEC!, plus Kentucky Fried Chicken and Dunkin Donuts.” (And Rocky Farms Nursery for providing the Tree Trimming Facebook prizes, Story to come.) “ . Mrs. Henderson adds, “To see all the Showcase entrants and get driving directions for viewing: just visit www.facebook.com/bahamasrealty. Click on the competition squares towards the top of the page. “ She concludes, “The excitement and spirit of the families who put so much work into decorating their homes for the enjoyment of others was truly moving. The magic behind the lights comes from the hearts of these families, and it’s palpable. Please take your children to see the lights and catch the Christmas Spirit.” BRL President Robin Brownrigg, who has personified Santa Claus at Bahamian schools, charities and very special events for 40 years, reiterates his company’s commitment to the Holiday Home Showcase: “ The weeks of preparation and beautiful lighting efforts in different segments of our community dwarf most houses in Albany, Eastern Rd. or Lyford Cay. You meet the families lighting these houses and you find out it is no mystery that they do what they do. They honour Christianity. Their bright and joyful spirit is a fundamental statement of what Christmas is about, giving and sharing and most of all, honouring the birth that changed our world. They greeted us with open arms and love. That is why we continue this very special competition...for the joy it gives.” Link to dropbox (credit: Photos by Ash Henderson) https://www.dropbox.com/sh/hft4hb7xj4oo1rg/h4mjRalrjp By P. S. News Features